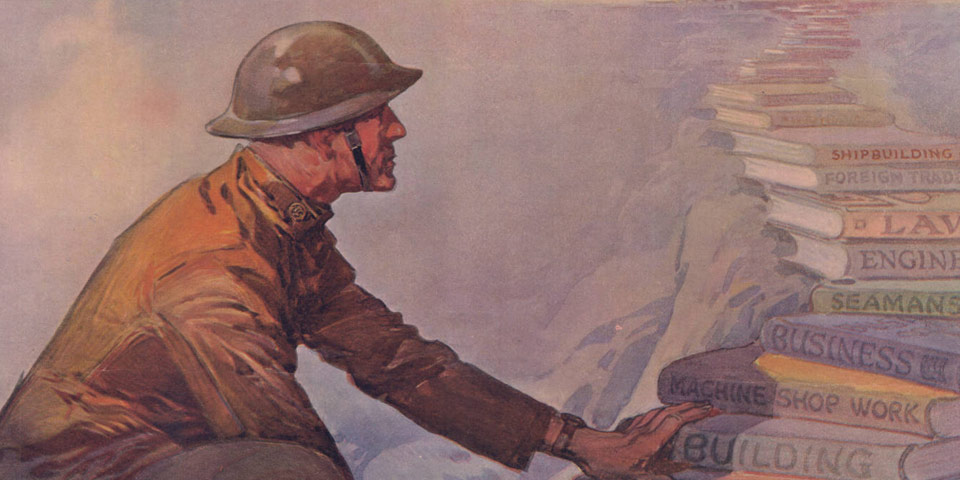 This exhibition is presented in commemoration of the service of the ISNU campus at the centennial of World War I, serving as a testament to the integral role its librarian, Ange V. Milner, performed in documenting, gathering, and preserving contributions made by the campus community during a time of war.

Featured are 20 vintage but vibrant war posters on display for the first time in nearly one hundred years. Drawn from Milner Library’s Government Documents World War Poster Collection, these iconic posters were originally distributed by the federal government and national organizations to mobilize citizens into action for an allied victory. During the war, Milner displayed these posters in the library and throughout the campus. Following the war, she preserved these items as a record of its involvement.

Also on display are selected photos, letters and news clippings taken from University’s War Service Record Collection held at the University Archives. On the War Service committee, Milner was charged with creating a detailed account of student, faculty, and alumni service during the war. Today these documents clearly reflect the appreciation and affection many held for Ange Milner and her dedication to writing letters to those far from home to help maintain their connections to the University.

Related programming will be held throughout the fall semester.

Sponsored by Milner Library with support from the Alice and Fannie Fell Trust.

For information about the collection and exhibition, please contact the Government Documents librarian, Angela Bonnell (abonne@ilstu.edu).