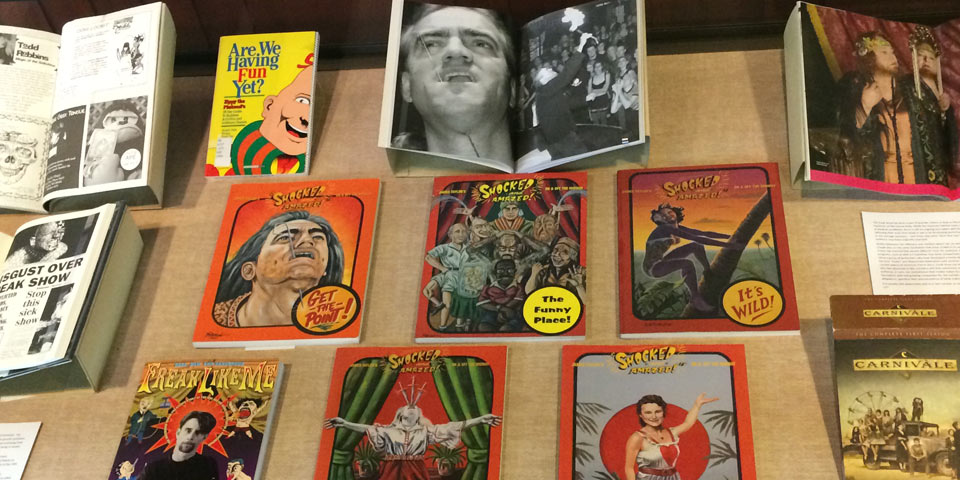 One Of Us: Sideshows, Freaks and the Unexplained exhibit

When Tod Browning’s film Freaks was released in 1932 it was met with horror and controversy. The film, in which the eponymous characters were played by people who worked as carnival sideshow performers and had real deformities, was considered so shocking by audiences that one woman threatened to sue MGM, claiming the film had caused her to suffer a miscarriage. Despite the controversy, Freaks and the sideshow inhabitants it depicted are invariably a part of American popular culture.

This exhibit looks at the long history of biological rarities and oddities that have commonly been thought of as “freaks of nature,” and the desire of the so-called “normal” audience to stare in awe at bodily differences. Featured are a variety of ephemera and artifacts from Milner Library’s Circus and Allied Arts Collection, dating as far back as 1634 up to the present-day.

Gaze upon 19th century cabinet cards of bearded ladies & legendary conjoined twins! Wonder at the strange attractions once housed in Barnum’s American Museum! Be amazed by the size of the sideshow giant’s ring and the shoes worn by Tom Thumb’s wife on their wedding day! Question your preconceptions of what makes a person a freak! Is it society who determines who is or isn't normal, or can we choose to be a freak? Ask yourself, are you in fact “one of us?”